(Does his laughter seem a bit hysterical?)

@WanderinPoet are you still talking and tweeting to me… Man you are obsessed with me Hahahah LOL pic.twitter.com/srjXpolUz0

The answer is shinging the light on cyberbullies makes them unable to operate effectively as cyberbullies.

Keith Gill, AKA DigitalKeith was moderated for cyberbullying me, his customer (and EmpireKred’s).

It’s not about him, personally.  I guess anyone could have run false advertising through Empire Avenue missions, refused to believe his advice was incorrect, then commenced attacking the person who was concerned about that false advertising…

This is an astonishing record of abuse against one of their own customers.

That, and I hope that DigitalKeith will see the light, and decide to be an agent for positive change at EmpireKred and work to end the cycle and culture of abuse that allowed abuse and attacks on their own customers over the last 4 years.

I realize that hope might be forlorn, but people can change for the better.

Over 5 posts on my blogs I documented issues with Empire Avenue, from their rogue volunteers, running a “wall of shame” on Brands, attacking Brands reputations online, not answering complaints, having a “goon squad” of endorsed volunteers attacking customers who complained, refusing to discipline internally thereby encouraging more attacks on Brands, etc. What I witnessed was the worst travesty in the annals of customer service I have ever seen. After a month of private discussions with EA to change things, I went public. Only then did they begin to change, but the attacks on me and others grew by their “goon squad.” In the end, I went to EA’s Angel Investor and EA had to shut down its Chat Room and Chat Mod “goons squad.” EA shamelessly has never apologized or produced it damning chat logs as promised by their CEO. This is one of those posts, you can read the rest by Search in the upper right for ‘Empire.’ Don’t play EA or if you do save your REAL money.

It’s ironic that Mr. Gill’s contacts on Twitter have been unable to bully me out of blogging about Empire Avenue (now EmpireKred), and Mr. Gill apparently feels the pressure.  Note his hysterical laughter.

I feel a need to kill http://t.co/Veql3PeopI

Why does Keith Gill hang around with a wife beater online?  Yep, Opinionated Man self medicates and beats his wife in his sleep.

Mr. Gill is in leadership at a corporation with an extensive record of attacks on their own customers. 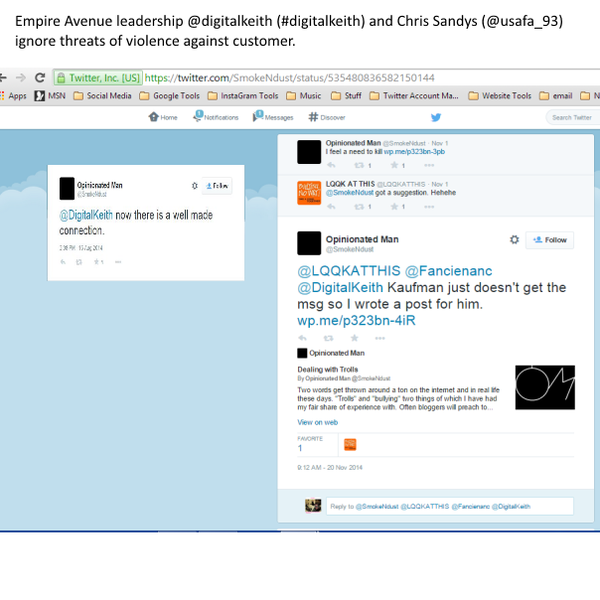 It’s sad that Empire Avenue (now EmpireKred) has a “Goon Squad”, and there can be no doubt why they have fewer than 1,000 active customers.

After all, a corporation with a history of threatening and doxing its own customers tends to drive them away.

And that’s exactly what has happened to Empire Avenue.

Chris Sandys, of EmpireKred leadership wanted that history “off the record.”

And I continue to tweet to and about Keith Gill and other abusive leadership of EmpireKred’s to keep it “on the record.”

That way potential customers know what EmpireKred’s history is, and what their leadership is capable of.

They attack their own customers, and according to reports still do.

And more customers of EmpireKred’s are acknowledging the cyberbullying on their system daily.

After all, Gareth Davies, in leadership at EmpireKred, can break a key safety feature of Twitter’s by being unblockable.  And EmpireKred Brand Manager/Admin Steven L. Johnson is mentioned in that tweet.

How can Twitter feel their customers are safe if Gareth Davies, who has been suspended by twitter for tweeting a customers private information, violent threats, and warned yet again for violent threats cannot be blocked?

And I can’t help it he ran false advertising through Empire Avenue’s mission system.

According to Empire Avenue admin, there are “inpowered” individuals at Empire Avenue (now EmpireKred) that abuse their authority.

Clearly Keith Gill is one of those abusers of his authority.

I still have no idea why Empire Avenue admins let him promote his false content through their missions system as advertising.  It astounds me.

I can’t help it that more customers are taking note of the cyberbullying that has taken place, and are speaking out about it.