After reporting Gareth Davies to Empire Avenue for cyberbullying of course I thought that responsible parties would immediately take care of what was occuring.

After all he had a history of doxing and threatening customers.

Boy was I wrong.

Rather than deal with his cyberbullying, he was allowed to cyberbully me, with Chris Sandys and others joining in with falsehoods and an astounding assortment of lies.

The most astonishing thing done was the setting up of a website dedicated to attacking other customers, along with associated social media accounts.

It was put up shortly after Gareth Davies tweeted his intent to bully me, his customer, with “games” to soon begin.

(The website has now been taken down by the originators.)

And thus, @lqqkatthis was born, and soon suspended by Twitter.

It’s the @lkkqatthis account commenting in between Opinionated Man’s “message” to me about his feeling a need to kill, here.

Gareth Davies, a leader at a company I was a customer of (suspended by Twitter for tweeting my private information, violent threats, and warned yet again for violent threats) was kind enough to lend @lqqkatthis advice when they had difficulties with their website.

And then Gareth, and others, began disseminating the lies that were published on that website.

I refused not to blog about Gareth’s abuse of customers as requested by Michael Q. Todd.

Consumers have a right to know that such a person is a leader at Empire Avenue, and routinely attacks customer of Empire Avenue’s (now EmpireKred) and Empire Avenue does nothing to stop him.

Is this what Empire Avenue Brand Manager/Admin Steven L. Johnson is teaching at UVA Mcintire School of Business?

How to attack your own customers and ignore the danger posed by a cyberbully that you most frequently correspond with on Twitter?

A cyberbully that cannot be blocked, thus negating a key @safety feature of Twitter’s?

A company that Empire Avenue relies upon for their own business?

All for a man that threatens his own customers, women and children?

Why not just stop the cyberbully, Gareth Davies? 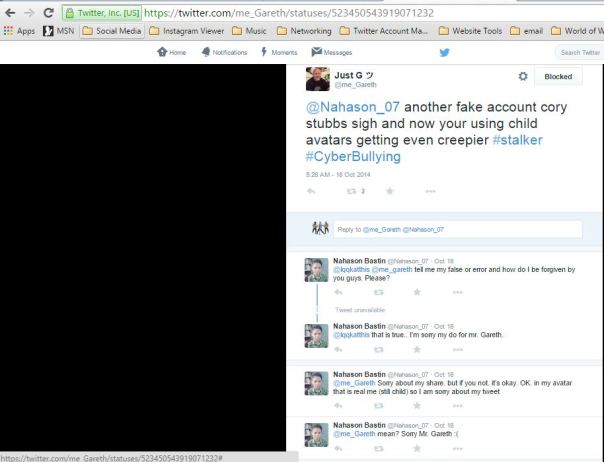 This account isn’t me.  But there’s no hesitation on Gareth’s part to abuse his own customer to try to attack me (also his customer.)

@NanceLarson @Fancienanc @me_Gareth @USAFA_93 So much for "consumer advocacy" reporting and blogging. What will the world do now?

No obsession either.  I told Gareth I’d be reporting and did so.  It still astounds me that Empire Avenue refused to stop his abuse.

And that leaders and Team Leader Nance Larson then participated in that abuse?  Truly troubling.

I was banned for blogging about Keith Gill’s false advertising.  Imagine that?

I remain appalled that Empire Avenue allowed Keith Gill to promote demonstrably false information through their “missions” system, even after reporting the falsehoods directly to Admin Robby Ball.

Stand up for bullying your own customers?

What’s sad is Omar Habayeb is both a leader at Empire Avenue (now EmpireKred) and an educator as well.

One wonders what they are teaching….

No, I called Gareth Davies a bully because he is  unblockable and was doxing, cyberstalking and harassing others on Twitter and elsewhere.